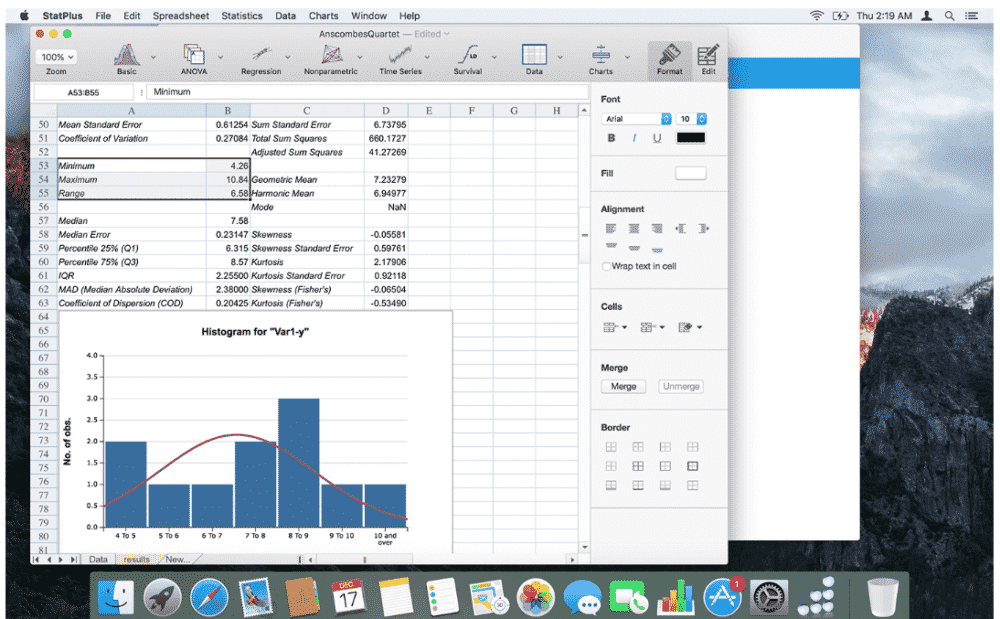 StatPlus:mac turns your copy of Microsoft Excel for Mac or Apple Numbers into a powerful statistical tool without making you learn another software or part with extraordinary amounts of money.

StatPlus:mac allows Mac users to perform all forms of data analysis from the very basics to complex analysis, including as non-parametric and regression analysis, survival analysis, and a wide variety of other methods.

7.5
Editor Rating
8.0
Aggregated User Rating
2 ratings
You have rated this

StatPlus is a professional statistical analysis tool; its interface is so simple that even people who have no knowledge of statistics are capable of processing data, provided they know how to use PC and clear instructions are given. This frees up intellectual resources for analyzing the results, rather than agonizing over who and how processed the data, and if any mistakes were made in the process.StatPlus offers services to both Windows and Mac users.

Users get a robust suite of statistics tools and graphical analysis methods that are easily accessed through a simple and straightforward interface. The range of possible applications of StatPlus v5 is virtually unlimited - sociology, financial analysis, biostatistics, economics, insurance industry, healthcare and clinical research.

Both versions include standalone spreadsheet and Excel add-in, this saves learning time and costs for the company’s mixed PC and Mac environment.

StatPlus allows its users to perform various forms of analysis - from data transformation and sampling to complex analysis, including as non-parametric and regression analysis, survival analysis, and a wide variety of other methods.

Work on familiar interface to perform complex analysis and calculations, enabling the user to concentrate on analyzing the results rather than figuring out how to achieve them.