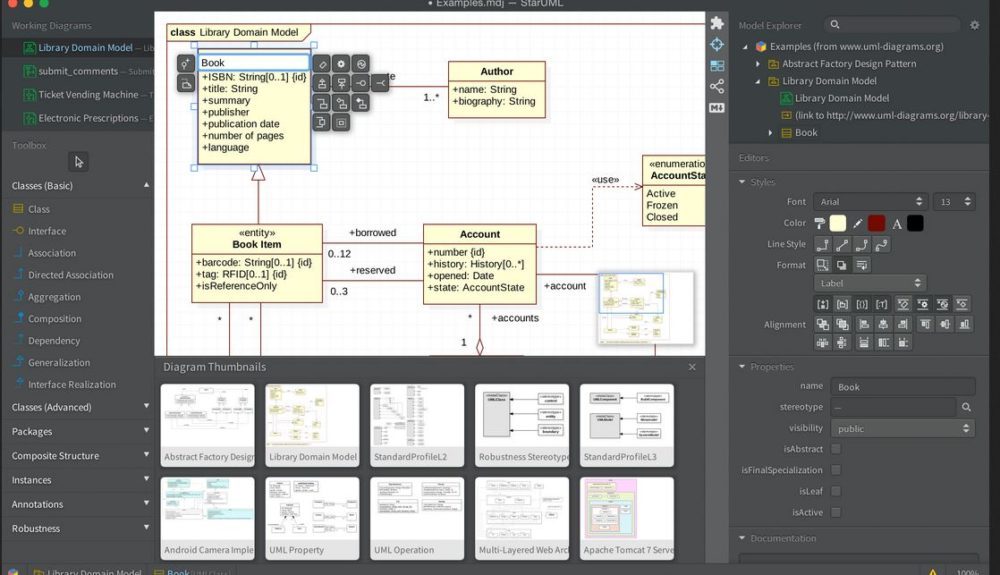 StarUML 2 supports many shorthands in Quick Edit to create elements and relationships at once such as sub-classes, supporting interfaces, etc.

8.2
Editor Rating
6.9
Aggregated User Rating
33 ratings
You have rated this

StarUML is an open source software modeling tool that supports UML (Unified Modeling Language). It is based on UML version 1.4, provides eleven different types of the diagram and it accepts UML 2.0 notation. StarUML 2 is a sophisticated software model developed by advanced UX and extensions. StarUML 2 is compatible with UML 2.x standard and supports totally 11 kinds of UML diagrams Class, Object, Use case, Component, Deployment, Sequence, Communication, Activity and Profile Diagram. StarUML 2is a commercial software, and there is no limit for evaluation.

StarUML is fast modeling tool. Creating elements and connecting them are hard tasks. StarUML supports many shorthands in Quick Edit to create elements and relationships at once such as sub-classes, supporting interfaces, etc. StarUML 2 supports Retina Display also. People can also get diagrams as the high-dpi bitmap images (PNG and JPEG). Using Extension Manager, people can easily find and install extensions from official extension registry or Github repositories. Extensions are open source and hosted on Github.

StarUML stores models in a simple JSON or Javascript Object Notation. StarUML also supports major programming languages including Java, C#, and C++. StarUML also uses Open APIs that allows adding Menus, UI, Dialogs, even the own modeling languages including metamodels, notations, and validation rules. StarUML also has Markdown Support to edit element’s documentation with the support of markdown syntax highlighting and preview. So, StarUML is a simple diagramming tool on Windows, built with Delphi, and might execute faster than the Java-based tools.

You may like to read: Open Source, Free and Top Unified Modeling Language (UML) Tools and How to Select the Best Flowchart Software for Your Business