IBM and Wimbledon cloud solutions to enrich the fan experience 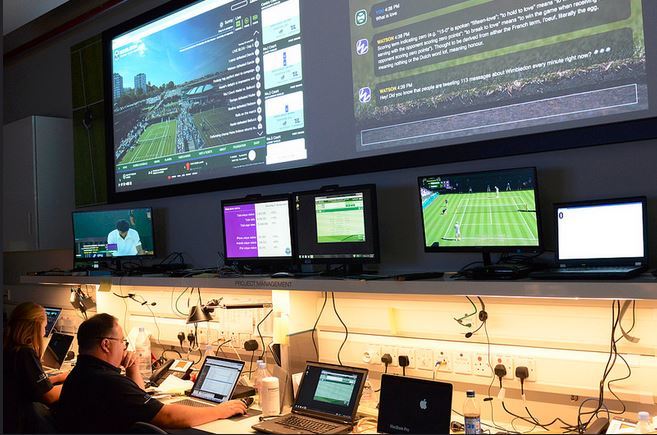 IBM and The All England Lawn Tennis Club (AELTC), unveiled new technologies for The Championships 2016, marking the next phase in the AELTC’s award-winning digital transformation. New for 2016 is an app for Apple TV for Wimbledon developed by IBM Interactive Experience that will enable fans to engage with Wimbledon in the comfort of their own homes. Users will be able to browse real-time scores, watch the Live @ Wimbledon studio show, listen to three live radio channels, and delve through all of Wimbledon’s video and photo content, bringing the 2016 Wimbledon experience into their homes in the truest sense.

New Wimbledon smartphone apps for iOS and Android, responsive to all screen sizes, will provide multi-content personalized feeds for fans at home and on the move. The new apps also provide an enhanced experience for visitors onsite at Wimbledon, including personalized messaging, and the opportunity to create their own Wimbledon Story, allowing fans to capture and share their unforgettable Wimbledon experiences with the global community.

Also new this year is a Cognitive Command Center built using IBM’s Watson and hybrid cloud technologies. The solution will ingest feeds across multiple social media channels to automatically understand, reason and learn the most relevant and emerging topics of conversation as they relate to Wimbledon, as well as other major sporting events, providing those insights to the digital editorial team.

By identifying common topics of interest, IBM can help Wimbledon identify opportunities to better serve related articles, posts and images. For example, the Cognitive Command Center could identify emerging conversations around a Swiss football game at the same time as a peak in interest around a moment in a Roger Federer match. Using these insights, Wimbledon will be able to make rapid content decisions to engage and inform sports fans during a summer filled with numerous major sporting events.

“We are proud to be continuing to evolve and develop our digital strategy, further enhancing the Wimbledon platforms to ensure that they are the incomparable Wimbledon destination for millions of fans around the world. As our content vies for attention in an increasingly competitive sporting landscape, IBM’s technology innovations are key to maintaining our prominence in the collective mind of our global fan base,” said Mick Desmond, Commercial & Media Director at the AELTC. “With help from IBM, we are providing new on-site features in the Smartphone apps allowing fans to plan their trip to The Championships in advance and share their moments on the day. In the home we are also taking the best and most relevant real time content, and delivering it to fans in the form of an app for Apple TV. Through beautiful design with unique data driven content and insights these apps will provide fans with a truly unique Wimbledon experience.”

During The Championships, IBM typically captures 3.2 million data points from 19 courts across 13 days with an accuracy target of 100% and a sub-second response time. It does this using highly trained tennis analysts and transforms that data in near real time to provide insights to commentators and media helping to bring The Championships to life for TV fans globally.

In under four seconds, the match insights IBM captures are also used to update millions of digital devices around the world, delivering a fan experience that supports the AELTC’s digital vision to be the next best thing to being there.

“Introducing cognitive solutions to the Wimbledon technology portfolio this year promises to deliver huge benefits for the AELTC in terms of insights, learnings and fan engagement,” said Sam Seddon, Wimbledon Client & Programme Executive, IBM. “Cognitive computing holds great potential as a game-changing technology and will enable Wimbledon to extend the reach and exposure of The Championships and support them in their objective to have their digital platforms be the gateway to the brand.”

The AELTC’s digital strategy for The Championships 2016 is powered by the following new and enhanced IBM innovations:

Real-time content delivery - by providing real time insights around breaking match records faster than anyone else, IBM supports Wimbledon in being ‘first to market’ with content, helping it rise above the noise of other global media outlets. This summer there will be even more context than ever before, with leader boards of all-time greats and alerts in advance of newsworthy milestones being hit.

Hill vs. World vs. Queue - a piece of social interaction that is rendered in a responsive web page across all digital channels. Questions are posed to those on The Hill via the large screen on the Hill, to those in the Queue, new for 2016, and to “the world” via Wimbledon’s social channels. The responses are analyzed and presented back to both communities.

The objective is to create a connection between the physical location and the digital world to unite Wimbledon fans on and offsite. If you can’t attend, you can get a sense of connection with those who can.

SlamTracker - extended to mobile web making the most of Wimbledon.com award winning digital experience. This allows fans to go beyond scores to analyze real time and historical player, match and tournament data. Additionally, SlamTracker enables fans to share insights on their social media accounts with the push of a button in the SlamTracker environment.