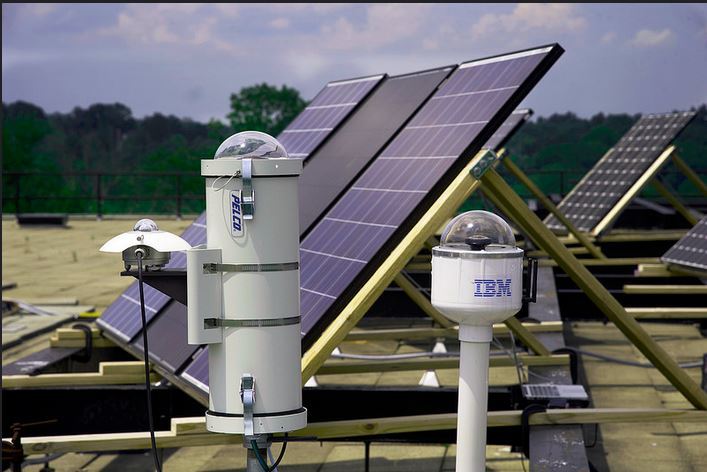 Machine Learning boost Accuracy of U.S. Department of Energy Solar Forecasts : Solar and wind forecasts producing using machine learning and other cognitive computing technologies are proving to be as much as 30 percent more accurate than ones created using conventional approaches. Part of a research program funded the by the U.S. Department of Energy’s SunShot Initiative, the results suggest new ways to optimize solar resources as they are increasingly integrated into the nation’s energy systems. IBM also announced that for a limited time it will provide foundational solar forecasts at five-kilometer spatial resolution to help government agencies and other organizations in the lower 48 states best evaluate their impact on supply and demand as well as operations.

IBM researchers worked with academic, government and industry collaborators to develop a Self-learning weather Model and renewable forecasting Technology, known as SMT. The SMT system uses machine learning, Big Data and analytics to continuously analyze, learn from and improve solar forecasts derived from a large number of weather models. In contrast, most current forecasting techniques rely on individual weather models that offer a more narrow view of the variables that affect the availability of renewable energy.IBM’s approach provides a general platform for renewable energy forecasting, including wind and hydro. It advances the state-of-the-art by using deep machine learning techniques to blend domain data, information from sensor networks and local weather stations, cloud motion physics derived from sky cameras and satellite observations, and multiple weather prediction models. The SMT system represents the first time such a broad range of forecasting methods have been integrated onto a single, scalable platform.

“By continuously training itself using historical records from thousands of weather stations and real time measurements, IBM’s system combines predictions from a number of weather models with geographic information and other data to produce the most accurate forecasts -- from minutes to weeks ahead," explained Dr. Siyuan Lu, Physical Analytics Researcher at IBM.

“By improving the accuracy of forecasting, utilities can operate more efficiently and profitably. That can increase the use of renewable energy sources as a more accepted energy generation option,” said Dr. Bri-Mathias Hodge, who oversees the Transmission and Grid Integration Group at the National Renewable Energy Laboratory (NREL), a collaborator in the project. In 2013, solar was the second-largest source of new electricity generating capacity in the U.S., exceeded only by natural gas. A USA SunShot Vision Study suggests that solar power could provide as much as 14% of U.S. electricity demand by 2030 and 27% by 2050.

“Solar photovoltaic resources have expanded dramatically in New England in the last five years, going from just 44 megawatts to 1,000 megawatts,” said Jonathan Black, lead engineer on ISO New England’s solar PV forecasting efforts and a collaborator in the project. “Currently, most of the solar installations in New England are ‘behind the meter’ on the distribution system, so their output isn’t ‘visible’ in real time to the ISO’s system operators, but it reduces the amount of electricity demand they observe. The growing aggregate output from all these resources across our region will increasingly change the daily demand curve, so the ISO will need accurate solar forecasts to help grid operators continue to balance power generation and consumer demand.”

The U.S. Department of Energy SunShot Initiative is a collaborative national effort that aggressively drives innovation to make solar energy fully cost-competitive with traditional energy sources before the end of the decade.