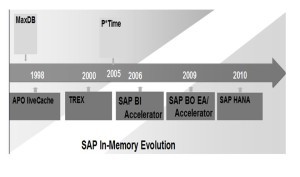 In 1998 SAP released SAP Advanced Planner and Optimizer (APO) 1.1. SAP APO which is part of SAP Supply Chain Management uses a memory resident database called APO liveCache. The APO livecache database resides in main memory and therefore avoids disk I/O. Since 2000, TREX which stands for Text Retrieval and information Extraction became a standard component of SAP NetWeaver. To enhance performance of TREX, In-memory attributes were added in 2002 and Columnar data store was added in 2003. SAP BI Accelerator as a computer appliance was introduced in 2006 followed by SAP Business Objects Explorer Accelerated and SAP Business Objects Accelerator. By combining these earlier developed and acquired technologies starting with APO liveCahe, SAP created an In-memory database called SAP HANA. SAP HANA is the synthesis of three separate products which are TREX, P*Time and MaxDB. SAP HANA SP4 was released on 20 November 2010 and SP5 was  released on Q4, 2012.

SAP APO ( Advanced Planner and Optimizer) is a planning tool which is used to plan demand and supply and to optimize the supply chain processes by making use of various modules such as Demand Planning, Supply Network Planning, Production Planning and Detailed Scheduling and Global Available to Promise.

SAP APO uses APO liveCache as the database management system for the planning data. In a Supply Chain environment, where data is organized in a complex network, a faster  database system was required. The disk I/O and the non-appropriate data description in the relational schema limited the performance in a conventional database. It takes about 0.1 ms to read data from an application buffer which is in the same address space as of the application. Reading data from a database takes typically about 1 ms if the corresponding record is already in the database buffer. It takes around 10 ms if the record must be read from a hard disk before.  Working with an application having a too small buffer to accommodate all required data causes a huge data traffic between application and database server.

After reading data into the application buffer they are still organized in a relational schema which is not appropriate to describe complex networks. To achieve a good performance for applications which require access to a large amount of data such as SAP APO, it was necessary to bring the application logic and the application data together in one address space. To overcome these performance problems, the APO liveCache was introduced, which is a dedicated server tier for the main memory-based temporary storage of volatile shared data.

liveCache is a program for high performance management of objects used by APO application programs. These are called COM routines. These OMS objects contain application data, whose meaning is unknown to the liveCache. All objects ideally are located in the main memory which is the global data cache of the liveCache. This may be swapped out to disk in case of memory shortage. COM routines run as stored procedures in the address space of liveCache. These are called from APO ABAP programs which run on the APO application servers. Since COM routines run in the address space of liveCache, they have direct access to OMS objects. Navigation over networks of OMS objects is very fast and a typical access time is less than 10 microseconds per object.

TREX which stands for Text Retrieval and information Extraction is a search engine in the SAP NetWeaver integrated technology platform. Started at 1996 as a student project at SAP in collaboration with DFKI, TREX became a standard component of SAP NetWeaver in 2000. To enhance performance, In memory attributes were added in 2002 and Columnar data store was added in 2003.

The TREX engine is a standalone component that can be used in a range of system environments. It is used primarily as an integral part of such SAP products as Enterprise Portal, Knowledge Warehouse, and Business Intelligence.

TREX supports various kinds of text search, including exact search, boolean search, wildcard search, linguistic search (grammatical variants are normalized for the index search) and fuzzy search (input strings that differ by a few letters from an index term are normalized for the index search). Result sets are ranked using term frequency inverse document frequency weighting, and the results can include snippets with the search terms highlighted.

TREX supports structured data search not only for document metadata but also for mass business data and data in SAP business objects. Indexes for structured data are implemented compactly using data compression and the data can be aggregated in linear time, to enable large volumes of data to be processed entirely in memory.

In SAP NetWeaver BI, the TREX engine powers the BI Accelerator, which is a plug-in appliance for enhancing the performance of online analytical processing.

SAP BI Accelerator which is introduced in 2006 is a computer appliance: a preinstalled software on predefined hardware. This is used to speed up OLAP queries. SAP BW Accelerator includes indexes that are vertically inverted reproductions of all the data included in InfoCubes which are the fact and dimension tables as well as master data. BW Accelerator have only a file system, and indexes are held as flat files with out any database management systems.

SAP BW Accelerator have SAP TREX search engine which processes the queries in memory .The software is running on an expandable rack of blade servers. The operating system used for BW Accelerator is 64-bit SUSE Linux Enterprise Server (SLES).

In 1997 SAP acquired this relational database from Software AG and developed it as SAP DB, releasing the source code under the GNU license.

MaxDB was added to TREX and P*Time to provide persistence and more traditional database features like backup.

Start RIGHT HERE If you are new to SAP HANA

Reviews
Leave a Review
like
What's your reaction?
Love It
0%
Very Good
0%
INTERESTED
0%
COOL
0%
NOT BAD
0%
WHAT !
0%
HATE IT
0%
Posted In
Database
Tags
sap hana
sap hana
You might also like
Database
MORE
Read More