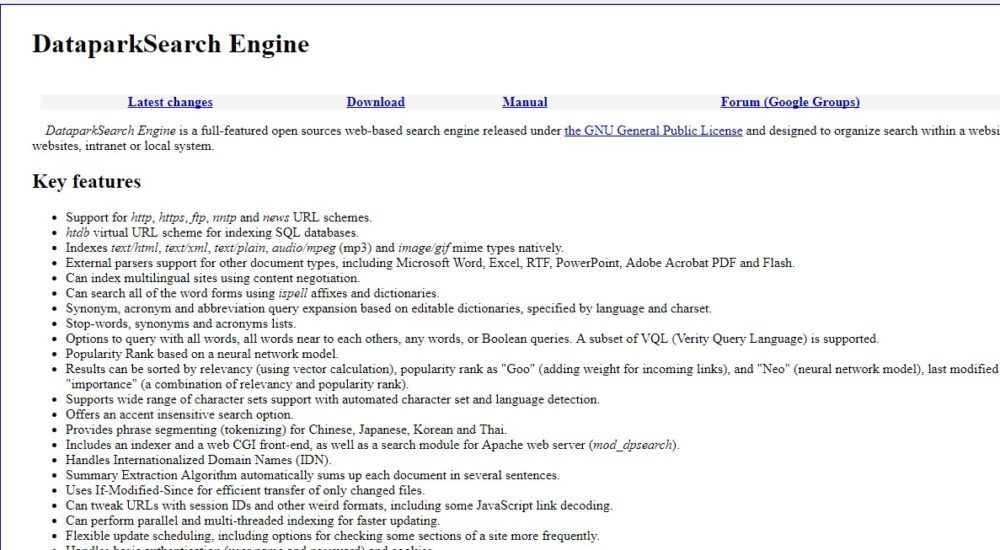 DataparkSearch Engine is a full-featured open sources web-based search engine released under the GNU General Public License and designed to organize search within a website, group of websites, intranet or local system.

• Popularity Rank based on a neural network model.
• Results can be sorted by relevancy (using vector calculation), popularity rank as "Goo" (adding weight for incoming links), and "Neo" (neural network model), last modified time, and by "importance" (a combination of relevancy and popularity rank).
• Supports wide range of character sets support with automated character set and language detection.
• Offers an accent insensitive search option.
• Provides phrase segmenting (tokenizing) for Chinese, Japanese, Korean and Thai.
• Includes an indexer and a web CGI front-end, as well as a search module for Apache web server (mod_dpsearch).
• Handles Internationalized Domain Names (IDN).
• Summary Extraction Algorithm automatically sums up each document in several sentences.
• Uses If-Modified-Since for efficient transfer of only changed files.
• Can tweak URLs with session IDs and other weird formats, including some JavaScript link decoding.
• Can perform parallel and multi-threaded indexing for faster updating.
• Flexible update scheduling, including options for checking some sections of a site more frequently.
• Handles basic authentication (user name and password) and cookies.
• Stores a compressed text version of the documents for extracting and viewing.
• Can specify a default character set and language for a server or subdirectory, or a list of possible languages.
• Noindex tags: ,

DataparkSearch is a full-featured web search engine. DataparkSearch consists of two parts. The first part is an indexing mechanism (the indexer). The indexer walks over hypertext references and stores found words and new references into the database.

7.6
Editor Rating
5.6
Aggregated User Rating
4 ratings
You have rated this

DataparkSearch Engine is a full-featured open sources web-based search engine released under the GNU General Public License and designed to organize search within a website, group of websites, intranet or local system. Users can use DataparkSearch group at the Google Groups (groups.google.com/group/dataparksearch/) to seek an advice on DataparkSearch. Users can also share their experience using DataparkSearch in this group.

DataparkSearch is a full-featured web search engine. DataparkSearch consists of two parts. The first part is an indexing mechanism (the indexer). The indexer walks over hypertext references and stores found words and new references into the database. The second part is a CGI front-end to provide the search service using the data collected by the indexer. DataparkSearch supports almost all known 8 bit character sets as well as some multi-byte charsets including Korean euc-kr, Chinese big5 and gb2312, Japanese shift-jis, euc-jp and iso-2022-jp, as well as UTF-8. Some multi-byte character sets are not supported by default, because the conversion tables for them are rather large that leads to increase of the executable files size. DataparkSearch also supports the following Macintosh character sets: MacCE, MacCroatian, MacGreek, MacRoman, MacTurkish, MacIceland, MacRomania, MacThai, MacArabic, MacHebrew, MacCyrillic, MacGujarati. It is possible to use DataparkSearch with several SQL databases. Users should have enough permission to create new database or to write into already existing one. DataparkSearch uses GNU Autoconf so it is possible to compile and use DataparkSearch on almost every modern UNIX system with a C compiler without any modifications. DataparkSearch was developed on FreeBSD 7.x using PostgreSQL 8.3.