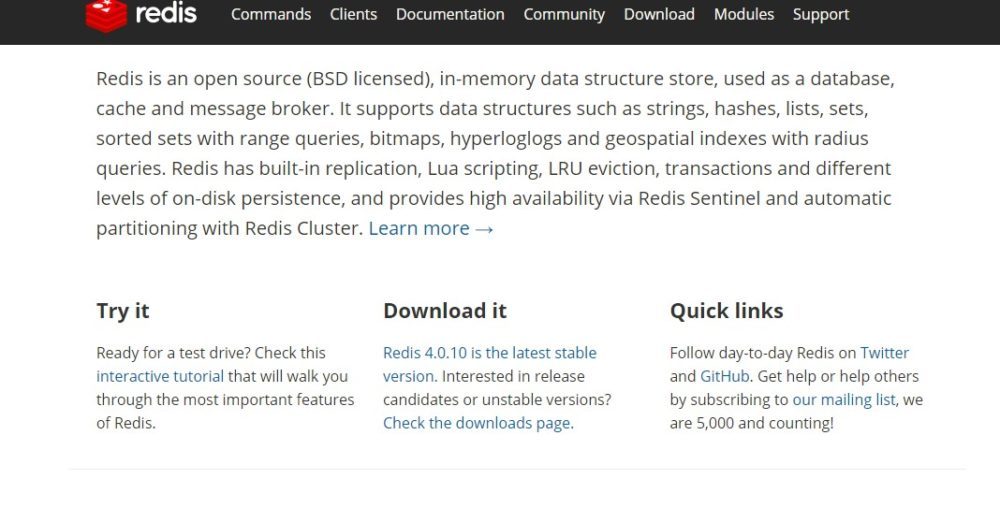 • Keyspace notifications allows clients to subscribe to Pub/Sub channels
• Sorted sets to create secondary indexes by ID or other numerical fields
• Geo API that allows users to query by radius, and latitude & longitude
• Redis Hashing: Stores data in the form of a key and a map
• Single-rooted replication tree
• Client APIs developed in all the popular languages such as C, Ruby, Java, javascript, and Python

• Keyspace notifications allows clients to subscribe to Pub/Sub channels
• Sorted sets to create secondary indexes by ID or other numerical fields
• Geo API that allows users to query by radius, and latitude & longitude

7.6
Editor Rating
9.0
Aggregated User Rating
4 ratings
You have rated this

Redis is an open source (BSD licensed), in-memory data structure store, used as a database, cache and message broker. It supports data structures such as strings, hashes, lists, sets, sorted sets with range queries, bitmaps, hyperloglogs and geospatial indexes with radius queries. Redis has built-in replication, Lua scripting, LRU eviction, transactions and different levels of on-disk persistence, and provides high availability via Redis Sentinel and automatic partitioning with Redis Cluster.  Run atomic operations on these types, like appending to a string; incrementing the value in a hash; pushing an element to a list; computing set intersection, union and difference; or getting the member with highest ranking in a sorted set. In order to achieve its outstanding performance, Redis works with an in-memory dataset. Depending on the use case, you can persist it either by dumping the dataset to disk every once in a while, or by appending each command to a log. Persistence can be optionally disabled, if clients just need a feature-rich, networked, in-memory cache. Redis also supports trivial-to-setup master-slave asynchronous replication, with very fast non-blocking first synchronization, auto-reconnection with partial re-synchronization on net split. Redis is written in ANSI C and works in most POSIX systems like Linux, *BSD, OS X without external dependencies. Redis modules make possible to extend Redis functionality using external modules, implementing new Redis commands at a speed and with features similar to what can be done inside the core itself. Redis is perfect for key-value situations of data including a key being a hash and the value being a huge json object.

like
What's your reaction?
Love It
0%
Very Good
0%
INTERESTED
0%
COOL
0%
NOT BAD
0%
WHAT !
0%
HATE IT
0%
Posted In
Bigdata Software Review, NoSQL Key Value Databases
Tags
About The Author