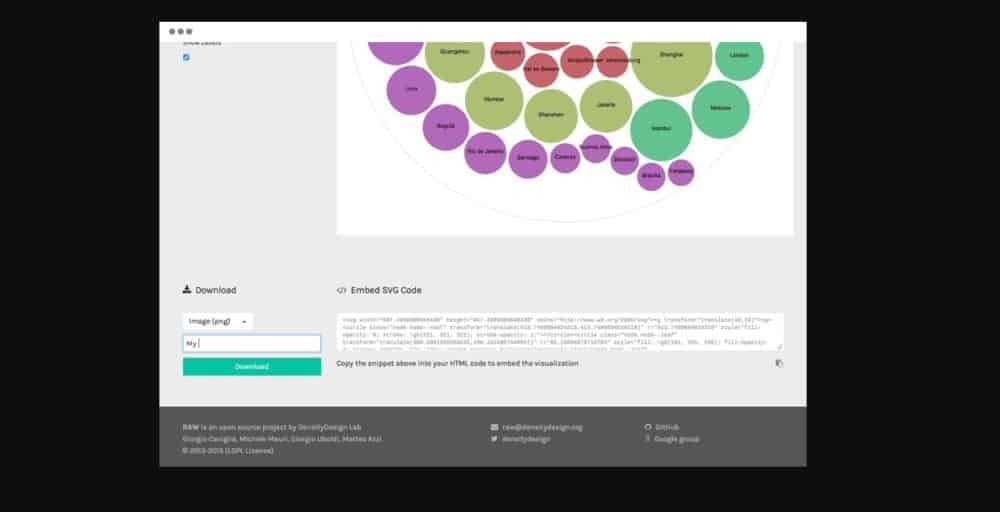 RAWGraphs allows you to export visualizations as vector (SVG) or raster (PNG) images and embed them into your web page. Since RAWGraphs produces semifinished visualizations, you can even open them in your favorite vector graphics editor and improve them.

• As simple as a copy-paste.
• No worries, your data is safe.
• Conventional and unconventional layouts.
• Understand and map visually your data dimensions.
• Visual feedback, immediately.
• Semifinished vectors and data structures.

• As simple as a copy-paste.
• No worries, your data is safe.
• Conventional and unconventional layouts.
• Understand and map visually your data dimensions.

RAW Graphs is an open source data visualization framework built with the goal of making the visual representation of complex data easy for everyone.

8.8
Editor Rating
8.0
Aggregated User Rating
12 ratings
You have rated this

RAW Graphs is an open-source, online data visualization platform which quickly generates beautiful data visualizations from user-inputted data with those data uploaded as a file in xlsx or CSV format, uploaded from a URL, or simply copied and pasted from a spreadsheet application.

RAW Graphs has features such as works with delimiter-separated values and CORS-enabled endpoints (APIs), No server-side operations or storages are performed, charts, map the dimensions of user’s dataset with the visual variables of the selected layout.

It also offers mapping and export visualizations as vector (SVG) or raster (PNG) images. RAW Graphs lets users select a chart, specify the axes/dimensions from their inputted data, and customize their visualization by inputting additional parameters.

RAW Graphs immediately displays the resulting visualizations on the screen so users can adjust parameters and see the results in real time. RAW Graphs is also highly customizable and extensible and accepting new custom charts defined by users.

RAW Graphs works with tabular data uploaded through dropping a plain text file containing delimiter-separated values such as .csv or .tsv where file extension does not matter, as long as users use one of the delimiters such as a comma, semicolon, tab or colon, copying and pasting users data from a spreadsheet like Microsoft Excel, Google Docs and Apple Numbers or a text file and typing the users’ data directly into the text area. RAW works with SVG format, so users can just copy and paste the code they find at the bottom of the app into any HTML page and embed it.