One Million Transactions per Minute in DBT2 Test for NuoDB 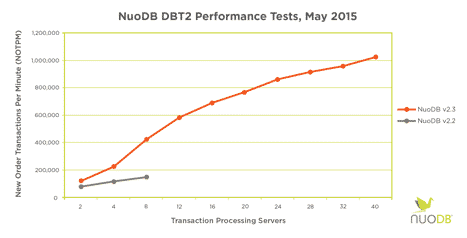 With growing demand for mobile apps and increased adoption of the Internet of Things (IoT), companies have to ensure their infrastructure can scale on demand, quickly and easily. This result underscores NuoDB’s ability to scale out by provisioning on-demand through the addition of machines when transactions are at their peak, such as on Black Friday, and scaling back effectively when a business is running at its normal pace.

“Our objective is to build a high-performance solution that can deliver on-demand capabilities well beyond what customers need today,” said Seth Proctor, chief technology officer, NuoDB. “This benchmark validates our innovative technology’s ability to support complex, high-volume transactions -- giving customers confidence that they will be able to add new, business critical applications to NuoDB as and when needed.”

As an OLTP system benchmark, TPC-C (Transaction Processing Performance Council) simulates a complete environment where a population of terminal operators executes transactions against a database. The benchmark is centered on the principal activities (transactions) of an order-entry environment. These transactions include entering and delivering orders, recording payments, checking the status of orders, and monitoring the level of stock at the warehouses. DBT2 is an implementation of TPC-C specification, originally created for MySQL and later extended to support PostgreSQL, Drizzle and SQLite.

Reviews
Leave a Review
like
What's your reaction?
Love It
0%
Very Good
0%
INTERESTED
0%
COOL
0%
NOT BAD
0%
WHAT !
0%
HATE IT
0%
Posted In
Database
Tags
database, NuoDB
database, NuoDB
You might also like
Database
MORE
Read More