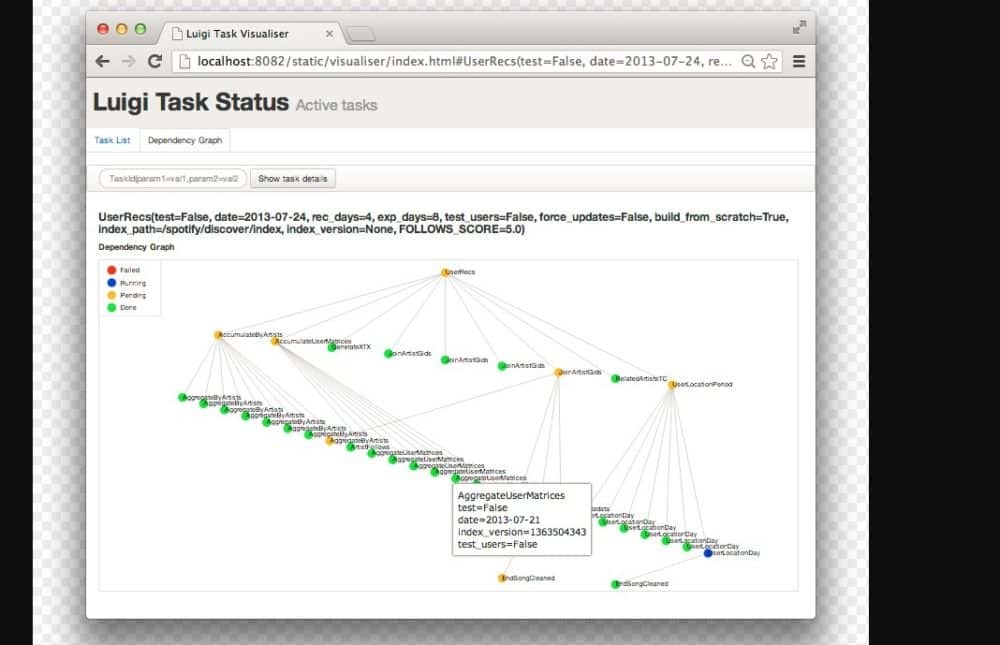 • Web interface too, so you can search and filter among all your tasks
•Visual overview of the dependency graph
•Build complex pipelines of batch jobs

7.9
Editor Rating
7.9
Aggregated User Rating
3 ratings
You have rated this

Luigi has a central scheduler which ensures each task is only run by a single worker where a task is uniquely identified by its class name and its parameters. Luigi helps the users stitch many tasks together, where each task can be a Hive query, a Hadoop job in Java, a Spark job in Scala or Python, a Python snippet or dumping a table from a database.

Luigi is easy to build up long-running pipelines that comprise thousands of tasks and take days or weeks to complete where Luigi takes care of a lot of the workflow management so that the users can focus on the tasks themselves and their dependencies.

Luigi can build a pipeline that understands and respects the dependencies where Luigi alerts the users when a job fails and its dependencies aren’t run until the users fix the problem so it is easy for the users to resume the pipeline and have only incomplete jobs run for parallelizing jobs. Luigi also comes with a toolbox of several common task templates that the users use including support for running Python map, reduce jobs in Hadoop, as well as Hive, and Pig with file system abstractions for HDFS, and local files that ensures all file system operations are atomic.