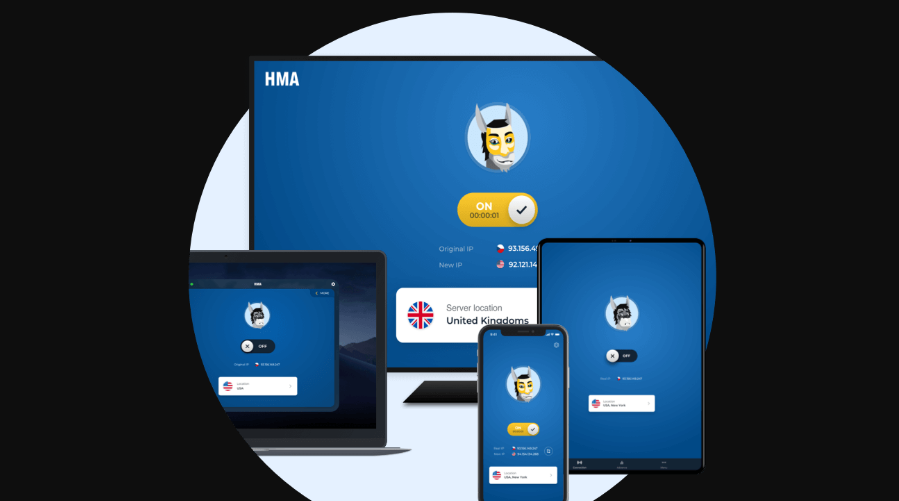 Hide My Ass (HMA) is a VPN software that allows you to access blocked sites quickly and securely. HMA uses 20 gbps server speeds on all its servers in their core data centers.

Hide My Ass (HMA) is a VPN software that offers features like smart kill switch, split-tunneling, IP shuffle, leak protection, and military-grade protection to allow you to access blocked sites quickly and securely.

7.6
Editor Rating
4.7
Aggregated User Rating
2 ratings
You have rated this

Hide My Ass (HMA) is a VPN software that allows you to access blocked sites quickly and securely. HMA uses 20 gbps server speeds on all its servers in their core data centers. With such high speeds, you have an excellent platform to stream 4K videos 800 times in parallel.

Nonetheless, their servers are set up in more than 190 countries around the world. The features provided by HMA include smart kill switch, split-tunneling, IP shuffle, leak protection, military-grade protection, automatic connection rules, and fully encrypted servers.

The smart kill switch ensures no data leaks when your connection to the VPN server drops. Nevertheless, you can customize it on Windows for it to activate your whole system or an app-by-app basis. On top of that, you can designate apps to launch HMA automatically whenever you start them up.

The military-grade protection feature is the highest encryption standard – 256-bit AES. Through this, all your data is encrypted. The automatic connection rules feature enables you to use HMA either via Wi-Fi, wired, or mobile networks that trigger the VPN to start automatically.

The fully encrypted servers feature ensures all the HMA servers are protected with the same unbreakable 256-bit encryption. Additionally, the P2P-optimized servers cover you when moving files in bulk. The feature ensures your IP address is masked while keeping any impact on your moving speeds at a minimum. Lastly, the speed test feature allows you to test the speed of HMA’s network by yourself, and select the location that works best for you.