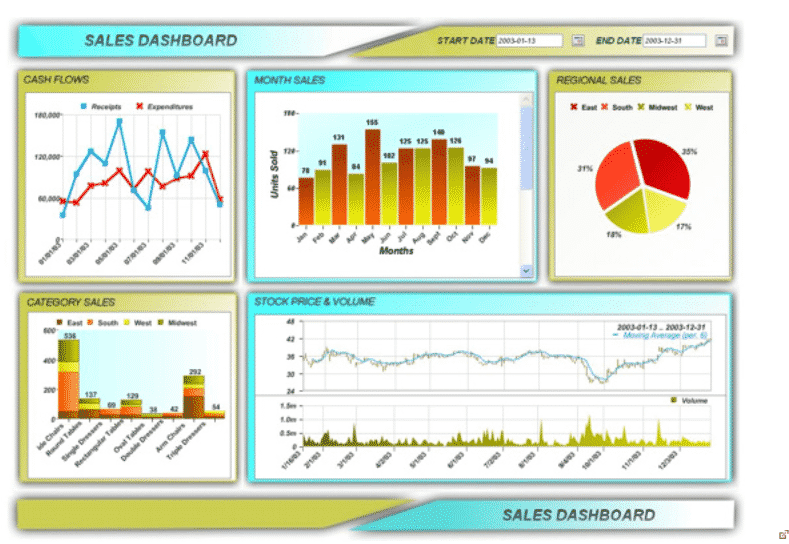 EspressReport Lite is a Java report development tool kit. It comes with a powerful, high performance reporting engine and a visual report builder.

•You can easily build embedded reporting functionality
•Works with web based or standalone applications.

•Provides the same capabilities as EspressReport except that sub-reports, drill-down, embedded charts and scheduling are not supported.

EspressReport Lite is a Java report development tool kit. It comes with a powerful, high performance reporting engine and a visual report builder. You can easily build embedded reporting functionality into your web based or standalone applications. It provides the same capabilities as EspressReport except that sub-reports, drill-down, embedded charts and scheduling are not supported.

It is designed to be easily used by non-programmers for rapid dashboard development and deployment. Charts, reports, and maps are created visually, without any script or code. They can then be assembled into a panel through an intuitive point-and-click, drag-and-drop client interface to create actionable KPI dashboards for immediate and secure deployment to end users. EspressDashboard supports the following data sources: JDBC and ODBC compliant databases, JNDI data sources, data warehouses, WSDL SOAP, Salesforce SOAP, text files, XML files, Excel Spreadsheets, Java class files, and EJBs.

EspressChart, the cornerstone for EspressReport, and ERES, is the premier charting tool for the development of interactive charts for web-based and desktop deployment. It allows users to create/edit elaborate charts using the Visual Designer and to publish these charts with the Java API. EspressChart now allows end users to show ordered data with the new Top N/ Bottom N option.

There are also expanded configuration options for gradients and smooth trend lines that make charts even more aesthetically appealing. Other great new features include: the ability to enter a vertical line with today as the value on Gantt Charts, an intuitive UI for specifying transposed data for charts, and the option to export completed charts directly into Excel.

EspressReport is a powerful development toolkit for building Java based reporting systems that can support both simple and complex reports that include sub reports, drill-downs, charts, and template security. It can satisfy a wide range of Java developers as it contains both an intuitive report designer and a robust API.

EspressReport ES is an enterprise BI and operational reporting and KPI dashboard publishing system that allows users to easily create and publish reports, charts, and dashboards as well as schedule reports and charts without any programming. ERES is ideal for organizations that need to implement a web-based enterprise, all in one reporting system for decision support, as well as performance monitoring and management.

The improved Organizer now features flexible sorting options, advanced search dialogs, and intuitive icons which improve both ease of use and functionality. Information can now be accessed anytime, anywhere with advanced mobile reporting that supports touch screen gestures for dashboards on smart phones and tablets, giving end users the opportunity to analyze and manage data while on the go. ERES 6.6 also has other new features such as enhanced manageability with support for multiple administrators and LDAP support for the active directory.

You may like to read: Free, Open Source and Top Reporting Software and How to Select the Best Business Intelligence Software for Your Business