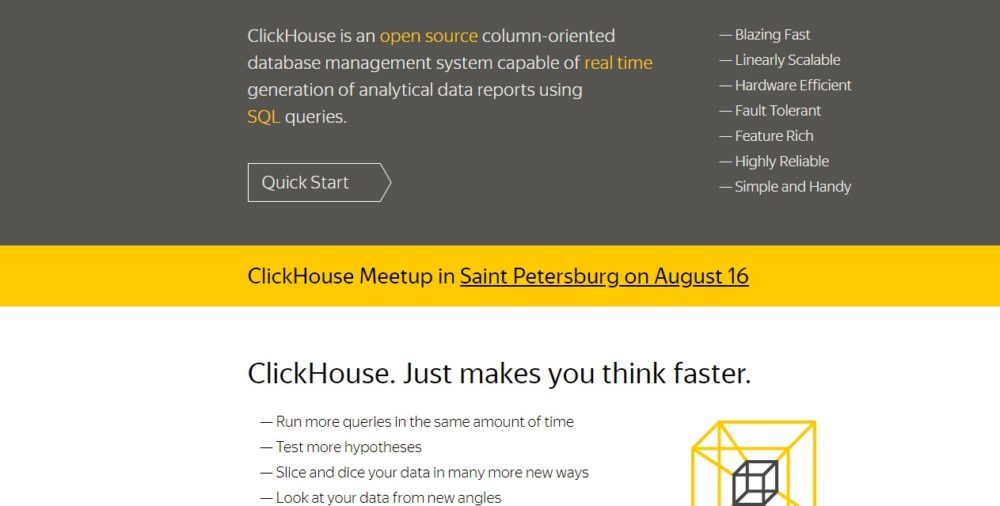 7.6
Editor Rating
7.3
Aggregated User Rating
20 ratings
You have rated this

ClickHouse is an open-source Column-oriented DBMS for online analytical processing. ClickHouse's performance exceeds comparable column-oriented DBMS currently available on the market. It processes hundreds of millions to more than a billion rows and tens of gigabytes of data per single server per second. ClickHouse is simple and works out-of-the-box. As well as performing on hundreds of node clusters, this system can be easily installed on a single server or even a virtual machine. ClickHouse uses all available hardware to its full potential to process each query as fast as possible. The peak processing performance for a single query stands at more than 2 terabytes per second. ClickHouse features a user-friendly SQL query dialect with a number of built-in analytics capabilities. For example, it includes probabilistic data structures for fast and memory-efficient calculation of cardinalities and quantiles. There are functions for working dates, times and time zones, as well as some specialized ones like addressing URLs and IPs (both IPv4 and IPv6). ClickHouse can be configured as purely distributed system located on independent nodes, without any single points of failure. ClickHouse allows companies to add servers to their clusters when necessary without investing time or money into any additional DBMS modification. ClickHouse is CPU efficient because of its vectorized query execution involving relevant processor instructions and runtime code generation. By minimizing data transfers for most types of queries, ClickHouse enables companies to manage their data and create reports without using specialized networks that are aimed at high-performance computing. ClickHouse offers flexible limits on query complexity and resource usage, which can be fine-tuned with settings. It is possible to simultaneously serve both a number of high priority low-latency requests and some long-running queries with background priority.