Germany moves on to the World Cup final in Rio on Sunday against Argentina. Germany and Argentina are competing for the third time in a World Cup final. In the past Argentina won in 1986, West Germany in 1990. Germany will become the first European team to win the World Cup on South American soil if it wins. Argentina is looking forward  to win at the home of their local rivals.

Over a year ago a partnership has started between the German Football Association (DFB) and SAP,  when DFB approached SAP, to simplify their business processes both on and off the field. This was necessary  to take the team to the next level. An innovation project, which was initiated as a result between SAP and the DFB, created the SAP Match Insights tool.The German team has been using SAP Match Insights tool throughout the tournament in Brazil. In nutshell, SAP Match Insights is a solution that runs on the SAP HANA platform and allows coaches and players to analyze their own performance and gain insights into their opponents.

The goal of the project between SAP and DFB was to enhance the on-field performance leading up to the World Cup. SAP Match Insights was developed to feature a simple user interface which can be used by players and coaches to facilitate a more interactive dialogue to debrief the team and to prepare for future matches.

SAP Match Insights analyzes the video data from on field cameras and these cameras are capable of capturing thousands of data points per second, which includes the player position and speed. The collected data is send to an SAP HANA database which runs analytics. The result provides the coaches to outline a performance metrics for specific players and to provide feedback to them via their mobile devices. As per Nicolas Jungkind, SAP’s head of soccer sponsorships, using Match Insights, the german team was able to analyze stats about average possession time and cut it down from 3.4 seconds to about 1.1 seconds and also to identify and visualize the change and show it to coaches, players and scouts.

In a high pressure, complex environment like the World Cup, SAP Match Insights is allowing the coaches to share complex match data with players in a simple, mobile format, allowing the team to create winning strategies. It’s working so far, but Germany will need to do it one final time against Argentina if they are to lift their fourth World Cup trophy. 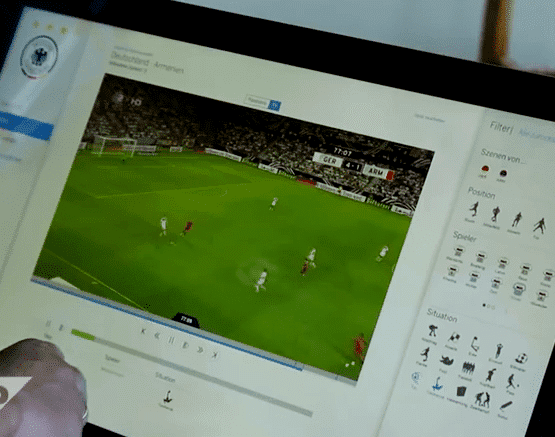 In Brazil, performance analytics have become truly mobile for the Germany team both the players and coaches can work with the app on their travels to and from match venues, right up until kick off. A big touch screen has also been installed in the players’ lounge in Campo Bahia, where members of the squad can look back at key scenes of past matches and ascertain data about their own performances. The interface has been designed to allow intuitive, uncomplicated use of the tool.

The specific way the data is used by SAP Match Insight by the German national team’s analytics team is a closely guarded secret during the World Cup tournament. But it’s safe to say that every effort is made to find uncover weaknesses in the opponents’ game and enhance the performances of the German national team with the help of incredibly detailed, real-time analysis especially now, at the business end of the competition, when goals come at a premium and every slip up can prematurely put paid to a team’s trophy ambitions.

One of the reasons why football has been historically difficult to analyse is due to the big role chance plays in the game. The insights are also aimed to be beneficial for the media, enabling them to deliver a better informed commentary.