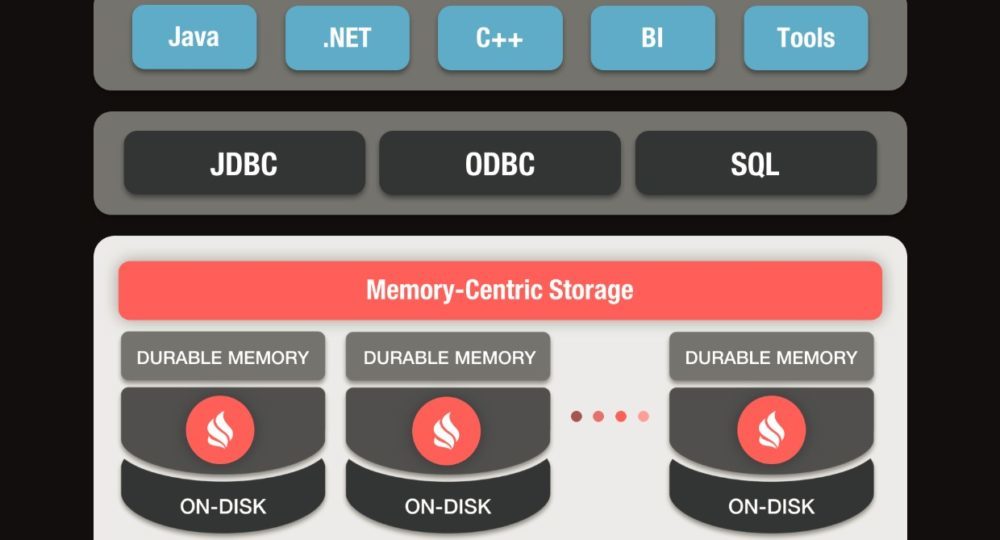 • Load balancing: Automatically make sure that about an equal number of services are deployed on each node within the cluster
• Create full and incremental cluster snapshots by plugging-in 3rd party solutions
• Machine learning: Train and deploy distributed machine learning models
• Durability: Committed transactions will always survive any failures

Apache Ignite is an open-source distributed database, caching and processing platform designed to store and compute on large volumes of data across a cluster of nodes.

7.6
Editor Rating
8.1
Aggregated User Rating
5 ratings
You have rated this

Ignite is a memory-centric distributed database, caching, and processing platform for transactional, analytical, and streaming workloads, delivering in-memory speeds at petabyte scale. Apache Ignite's database utilizes RAM as the default storage and processing tier, thus, belonging to the class of in-memory-computing platforms. Regardless of the API used, data in Ignite is stored in the form of key-value pairs. The database component scales horizontally, distributing key-value pairs across the cluster in such a way that every node owns a portion of the overall data set. Data is rebalanced automatically whenever a node is added to or removed from the cluster. Apache Ignite clustering component is based on the shared nothing architecture. The nodes are divided into two main categories - server and client. Server nodes are storage and computational units of the cluster that hold both data and indexes and process incoming requests along with computations. Server nodes are also known as data nodes. Apache Ignite native persistence is a distributed and strongly consistent disk store that always holds a superset of data and indexes on disk. The memory tier will only cache as much data as it can depending on its capacity. Apache Ignite comes with ANSI-99 compliant, horizontally scalable and fault-tolerant distributed SQL database. The distribution is provided either by partitioning the data across cluster nodes or by full replication, depending on the use case. Apache Ignite supports Data Definition Language (DDL) statements for creating and removing SQL tables and indexes at runtime. Apache Ignite comes with in-memory implementation of Hadoop MapReduce APIs which provides significant acceleration over the native Hadoop MapReduce implementation.