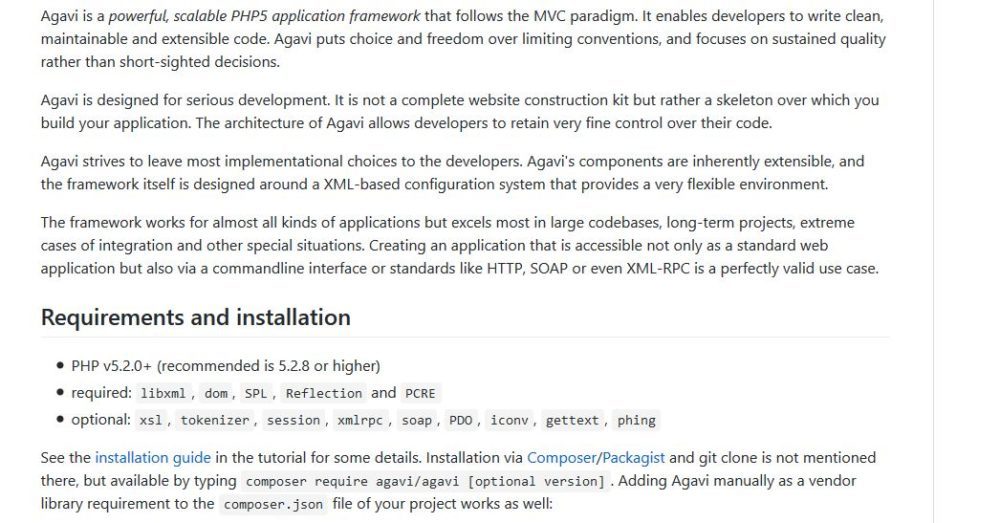 Agavi is a powerful, scalable PHP5 application framework that follows the MVC paradigm. It enables developers to write clean, maintainable and extensible code.

7.6
Editor Rating
9.3
Aggregated User Rating
1 rating
You have rated this

Agavi is a powerful, scalable PHP5 application framework that follows the MVC paradigm. It enables developers to write clean, maintainable and extensible code. Agavi puts choice and freedom over limiting conventions, and focuses on sustained quality rather than short-sighted decisions.Agavi is designed for serious development.

It is not a complete website construction kit but rather a skeleton over which the developer can build the application. The architecture of Agavi allows developers to retain very fine control over their code.Agavi strives to leave most implementational choices to the developers.

Agavi's components are inherently extensible, and the framework itself is designed around a XML-based configuration system that provides a very flexible environment.The framework works for almost all kinds of applications but excels most in large codebases, long-term projects, extreme cases of integration and other special situations.

Creating an application that is accessible not only as a standard web application but also via a commandline interface or standards like HTTP, SOAP or even XML-RPC is a perfectly valid use case.